An unexpected phone call, a meeting on The Great Wall of China and a former naval officer. This is how Head Energy’s offshore wind adventure gathered pace and became an integral part of the company’s business strategy.

In the first quarters of 2014, a decreasing oil price and a reduced number of contracts across the areas of new installations as well as maintenance and modifications on the Norwegian shelf was already starting to become a concern for most players operating within the oil & gas market. CEO of Head Energy Group, Morten Leikvoll, remember this period very well. Especially the phone call that opened the gates to a market in desperate need for highly qualified offshore engineering and project management personnel;

-I think everyone sensed that something was going on in the Norwegian oil & gas market. We know that it is a cyclical market, and that downturns happen every seven years or so. Statoil had already started to put pressure on suppliers, the oil price had started to drop and there just weren’t that many enquiries from our clients anymore.

-Then, a former contact of mine called me one day. “We need approximately one hundred engineers and project managers with offshore experience asap. Can you help us out?”

-It turned out that they were building substations for several large offshore wind farms, and needed personnel that could make sure the platforms met the offshore criteria. During 2014 and 2015, more than 80 Head Energy consultants participated in the construction and commissioning process of three major substations. Of course, we were happy to help them out, Leikvoll smiles. 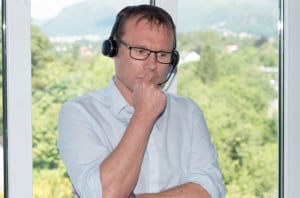 Not just about luck

The offshore wind contracts helped Head Energy survive what turned out to be a disastrous year for the Norwegian oil & gas market in 2015. While competitors struggled to make ends meet, Head Energy made a small profit and managed to keep most of the consultants employed. Although Leikvoll admits there was some luck involved in getting a foothold in a new market segment for Norwegian offshore competence, he emphasizes that the quality of the personnel, both engineers and project managers, was the decisive part in getting such a high number of offshore wind consulting contracts;

-We were lucky to be given the opportunity, perhaps. But without a solid reputation in the market, we would probably not have ended up with the opportunity in the first place. And when we were given the chance, two things made the difference

-First, our Team Managers in Stavanger, Oslo and Bergen did a tremendous job in picking the right candidates for the available positions. People who were able and willing to step into demanding projects, and for most of them a long way from home, and get the job done.

-Second, the remarkable effort put in by our consultants. We got very positive feedback from the client, and I think it is safe to say that some of the consultants were instrumental in getting the substations ready and functional for offshore operation.

Late 2015, the commissioning of the substations was coming to an end, and Head Energy only had a few consultants left in the projects. The oil & gas market was still at a low and very unpredictable, so Head Energy’s tremendous first offshore wind project made Head Energy eager to pursue further offshore wind opportunities. 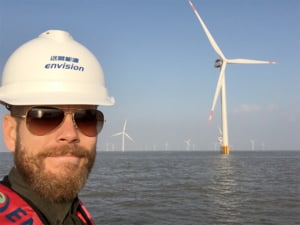 Regional Manager Anders Lunde, who had been strongly involved in the substation projects for Head Energy, was sent to China to join an offshore wind conference / delegation, and told to look for potential clients and partners. The two-week journey was an eye opener in terms of potential within the offshore wind market, both in the more mature European market and the emerging Asian markets;

-This was probably when we realized the magnitude and scale of the offshore wind development that was happening. And we realized that this was heading towards possibly a very profitable industry. When countries like China and Germany decides to be front runners in development of new energy production methods and distribution, it is very likely that this will have an impact on the energy markets in the future, Lunde says.

During the delegation trip, there was an organized social trip to the Great Wall of China. Here, Lunde tells us, he met a Dane named Thomas Poulsen. A Wind Energy PhD-student and project manager of the delegation trip to China with a background from logistics. The two quickly found common ground, and Poulsen told Lunde he was part of a team in Esbjerg, Denmark, who was planning to launch a new offshore wind set-up. The Danish team consisted of specialists within offshore wind marine operations, harbor logistics and HSEQ.

Lunde and Poulsen agreed to speak again if anything materialized.

A strategy is formed

A few weeks later, Lunde’s phone rang. It was Thomas Poulsen. The Danes were eager to further investigate a potential partnership with Head Energy. The dialogue continued over Christmas, and in May 2016, Head Energy Denmark A/S was founded.

Anders Frederiksen was a key player in the process of founding Head Energy Denmark and entered the position as General Manager in April 2016. Frederiksen, a former lieutenant in the Royal Danish Navy, has extensive experience as HSE Coach in DEME-GeoSea (formerly A2Sea), one of the leading companies within offshore wind installation and service solutions. He has also been duty officer on an offshore wind turbine installation vessel, and has participated in the construction of three offshore wind parks. Frederiksen was at the helm of strategic planning from the beginning and worked hard to assemble a team of operational experts that would attract the major operators within the industry.

-We benefited a lot from Head Energy’s experiences, client portfolio and engineering know-how, as well as their corporate structure. The board members of Head Energy Denmark A/S have also been heavily involved in securing a strong offshore wind business foundation, Frederiksen says.

-When we approached potential clients, we felt welcome and that we were taken seriously. In my opinion, this was related to the fact that we could present highly qualified personnel straight away, and that we possessed relevant experience and know-how from the industry.

-The manner of which our consultants have represented Head Energy in their assignments has been of utmost importance. We now have a team of ambassadors working for our major clients every day. That is, in my view, the best sort of marketing there is, Frederiksen emphasizes.

The Head Energy Group now has a streamlined approach towards the European offshore wind market. Most of the day-to-day contact with existing and potential clients is handled from the Esbjerg office, with assistance from the consulting divisions in Stavanger and Bergen. Contracts, legal- and financial matters is jointly handled from Head Energy’s headquarters in Bergen and Esbjerg, to enable Anders Frederiksen and Anne Mette Christiansen to focus on commercial development.

Frederiksen believes there is a clear potential for organic growth;

-It has been an exciting and inspiring journey so far for the Danish team and in cooperation with our Norwegian colleagues. This summer we brought in Anne Mette Christiansen to strengthen us commercially and we are currently in the process of employing a finance & accounting resource, to handle the growing administrative workload.

-We believe there is great potential for further growth in the years to come in terms of consultants, new clients and geographic expansion.

Member of the Board of Head Energy Denmark A/S, Thomas Poulsen, who was the first link between Head Energy and the Danish team, believes a continuous focus on frame agreements is key to further success;

-We now hold frame agreements with Ørsted, SIEMENS-Gamesa and Vattenfall, and a lot of work is being done to do more for these existing clients and to secure additional agreements with new clients. Those agreements have been key to our success, and will hopefully grant us access to major clients in Europe as well in the future.

-If new markets open up in Asia and North-America, it is likely that there will be a need for experienced professionals from Europe to bring their expertise and know-how along. This could open a lot of doors for Head Energy and could possibly enable us to follow our existing clients into those emerging markets, Poulsen says.

-If we focus on attracting highly competent resources, growth will come along. Focus on our core competence and remember Head Energy’s vision, to bring our clients and employees one step ahead, General Manager Anders Frederiksen sums up.